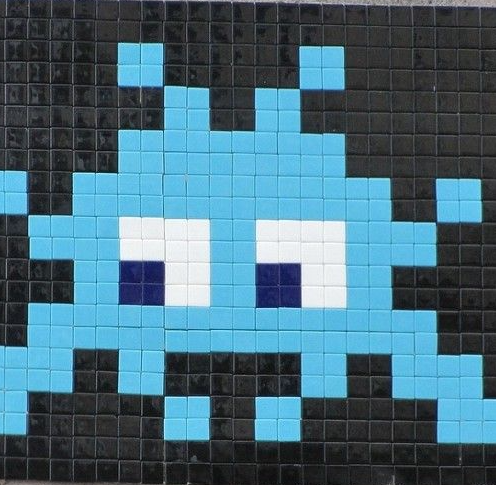 This map is the 23rd invasion map to be published and will help you find the 72 space invader mosaics spread around the Miami, Florida. This map by Invader was made in 2012 for Art Basel Miami.

Notes: In 2012, Invader visited Miami for the second time, expanding his invasion of the city. He added 44 new mosaics to the 28 previously placed in 2010, bringing the total number of Miami invaders to 72. As with all of his invasions, Invader methodically maps out and documents each individual placement on the street. His meticulous reference system allows him to capture and immortalize the project on a global scale. This archival process is materialized by the publication of Invasion of Miami a map showing his placement locations throughout the city and the invasion guide/book Mission Miami, both released in conjunction with this exhibition.

Invader (French, b.1969), also known as Space Invader, is an Urban artist originally based in Paris. He affixes mosaic images of characters from the 1970s video game “Space Invaders" in cities around the world. Once a work is completed, Invader records it as an "invasion" and creates accompanying maps and reference books to indicate the location of each piece. Invader began these urban, outdoor installations in Paris in 1998, and continued to "invade" 31 other cities in France, followed by an additional 22 cities across Europe. Currently, cities in the United States, Canada, Asia, and Australia are also home to examples of Invader's work.The mosaics are made using weather-resistant tiles, which represent the pixels used for graphics in early video and computer games. The installation process typically takes at least one week, including scouting, recording, and mapping locations. One of the most conspicuous locations to feature works by Invader is the landmark Hollywood Sign in California; the first mosaic work was mounted on the "D," on December 31, 1999. In addition to mosaics, Invader creates similarly pixelated works using Rubik’s Cubes. Since 2000, Invader's works have been featured in galleries around the world, and he gained even greater popularity and renown after he was featured in the 2010 documentary film about Street Art, Exit Through the Gift Shop.