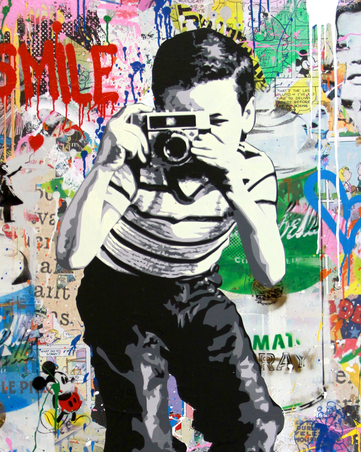 Provenance: Signed in the plate. Gallery Certificate of Authenticity.

Condition: Very Good (See Photos). Please note that there may be minor knocks or creases as is the nature of these types of posters.

Washington, DC - August 15, 2012: Rock the Vote announced today that it will once again hit the road with ‘Road Trip 2012,’ a bus tour designed to fully maximize voter registration, education, and engagement efforts as young people face an onslaught of regressive voting restrictions in states across the country. Celebrated street artist Mr. Brainwash designed the inspired tour bus exterior (photo above). Each tour stop will feature exciting talent, speakers, and celebrity hosts—including Jack Johnson, Motion City Soundtrack, Tabi Bonney and Asher Roth just to name a few. The first leg will kick off in Tampa, FL on August 28th around the Republican National Convention before the bus winds its way to Charlotte, NC for the Democratic National Convention, and then across the South and East Coast wrapping at Penn State on September 19th with a performance by Jack Johnson, who said, "By voting, the youth has the power to shape the world they want. If you like to rock and if you like having the right to vote, come out and help us Rock The Vote on September 19th". Jack will be joined at this date with special performances by G. Loveand ALO.

Since its founding 21 years ago, Rock the Vote has become the largest nonpartisan registration organization in the country, registering over 2.2 million individuals to vote in 2008 alone. Some of the incredible talent that performed during Road Trip ’08 included TV On The Radio, Beastie Boys, Santigold, Ben Harper, Jack Black, and Sheryl Crow. In 2012, Rock the Vote has teamed up with experiential marketing agency BMF Media Group for event production to bring this election to young people and find more ways for them to engage, get registered, and speak out about why they are participating in the election this year.