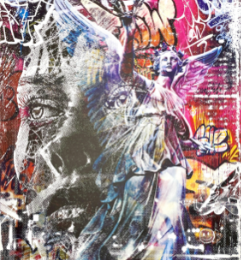 A collaboration between renowned artists PichiAvo and Vhils for the commemoration of the United Nations International Day for the Elimination of Violence against Women. Published by Underdogs Gallery

Provenance: Hand-numbered and hand-signed by both artists. Comes with original Certificate of Authenticity (COA)

Vhils is a young artist who has already engraved a permanent mark in street art history. He divides his carvings into layers of images and then begins by destroying to create. His work consists of faces of individuals, often-unknown beings within a community.
This artist believes that destruction is a form of construction. You read that right. As crazy as it sounds he has found a very impressive method and that is by etching, scratching, carving and even exploding walls! Of course, much graffiti can be labeled destructive, but his work is truly pushing the boundaries. He believes change is necessary to communicate with the mass public, and this includes society. Vhils currently lives and works in London and Lisbon.
Use left/right arrows to navigate the slideshow or swipe left/right if using a mobile device