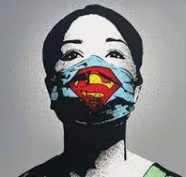 Provenance: Hand-signed and hand-numbered by artist with artist's embossment // Comes with original FAKE Certificate of Authenticity.

This work marks a new point in time. We are now in the 4th wave and the pressure on the healthcare workers is relentless. And with the "Omicron" variant getting a hold of countries around the world it might get even worse. With this work I want to raise more awareness of the fact that for most healthcare workers not much has changed since the start of the pandemic.

Artist FAKE from Amsterdam has been a street artist starting in 2005. Using stencils he made his fame early in the street art scene all over the world. FAKE traveled the world making his murals and street art in city's like New York, London, Paris, Berlin, LA, Madrid, Copenhagen Oslo, Bangkok and many more.

FAKE has had solo expositions and show in the USA, United Kingdom, Germany, France, Denmark, Norway and The Netherlands working with the best galleries.

His stencil and graffiti work is highly collectable and wanted, with sold out shows at PAN Amsterdam and instantly sold out releases in collaboration with galleries. Amongst fans and collectors his work is in art collections such as the Rabobank Collection, celebrities, athletes and musicians. Most of his work contains autonomous work, but he also collaborated with brands such as Diesel, Bavaria, Philips, Vans, 55DSL and Stussy.