Divided We Stand, United We Fall 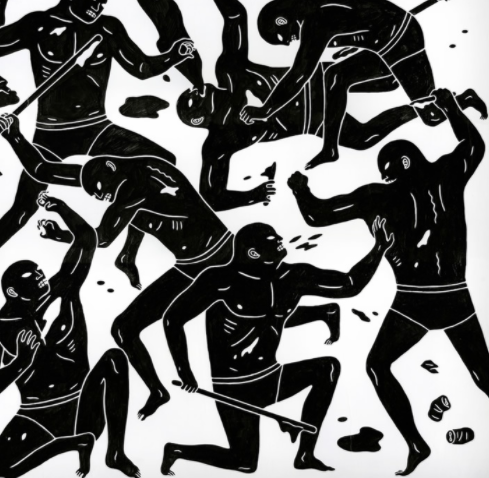 Provenance: Hand-signed and hand numbered by artist. Comes with Gallery Certificate of Authenticity.

"NEW 24-hour timed print release. Cleon Peterson and I are sharing new works TOGETHER which will benefit the ACLU, based on shared principles."

"After watching the January 6th hearings, I called Shepard, and we talked about the testimony and how it affected us. I told him I was thinking about releasing some posters on the subject. Shepard and I have been close friends for 25 years.

For over a decade, we sat next to each other, working and sharing our ideas about the world. How we see things and what our place is. I mentioned that I’d always felt driven by hatred of what I saw as unjust authority.

In my 20s, I felt like a social outsider, cast out and alienated from society. I didn’t have the self-knowledge to understand that I’d put myself in that position as much as anyone else. Shepard mentioned how reactionary rebellion has shifted in him too.

As I’ve grown older, I’ve begun to realize that if I want to be part of the world, I can’t assume the spectator’s role; I need to have some skin in the game and voice what I see as right and wrong.

Shepard mentioned that he’d been working on some prints related to the subject too. So in the spirit of 2 friends sitting next to each other as we did years ago, we came up with the idea that this would be an excellent opportunity to present our work and thoughts jointly, sharing the dialogue we, as friends and citizens, have practiced for years.

We also hope to inspire other artists to use their voices through their art and other outlets."

"July 4th is a day to reflect on the principles that inspired American independence and what it means to be a steward of the best of those principles in the current moment.

As Cleon said, he and I have long maintained a suspicion of unjust authority, but have evolved over the years to blend a questioning of narratives and structures with a sense of civic responsibility. We both want to help improve the health of the society we and all individuals comprise and depend on, not for personal gain or power, but to improve our collective quality of life.

We are experiencing a pervasive mass psychosis fueled by fear and disinformation, which breeds animosity, tribalism, and skepticism about truth and facts. A psychologically handicapped society cannot function properly, much less deliver solutions for the greater good. I believe in truth and democracy, which means I think that if people, regardless of political party, are given honest information and the full picture, they benefit from the power to decide on policies and leaders that shape the society we live in.

When objective reality itself is corrupted by perpetual coordinated lies and democracy is undermined, the societal systems we rely upon, and benefit from, begin to break down. We are at a critical moment for the preservation of democracy and non-partisan access to voting for all citizens of voting age.

Between the Supreme Court, partisan gerrymandering shaping state legislatures, and the filibuster as a tool of obstruction in Congress, we are already facing tyranny by the minority. The forces dominating our politics do not reflect the values of most Americans.

My print, Alternative Facts, addresses the mass confusion about truth that allows the parties who spread the big lie about the 2020 election (and many other lies) fomented the January 6th insurrection and are engaged in voter suppression and other anti-democracy schemes, to flourish unchecked. A portion of proceeds from Alternative Facts will benefit the ACLU in its legal fights against voter suppression and other attacks on the constitution.

Thank you to those with the courage to testify in the January 6th hearings and those who take the time to engage knowledgeably and meaningfully in our civic discourse."

Cleon Peterson is an LA based artist whose chaotic and violent paintings show clashing figures symbolizing a struggle between power and submission in the fluctuating architecture of contemporary society. Cleon’s paintings are monochromatic while channeling at the same time the fashion sensibility of the early 80′s, complete with skinny ties and day glow colors.