When The Moon Turns Red 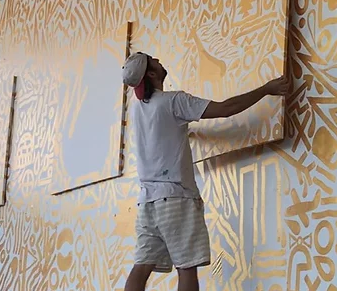 Post Modern Vandal is excited to collaborate with Spencer and publish his first print since his sold out releases in 2016 on 1xRun!

Printed in-house on beautiful 340gsm High-gloss Metallic Finish Hahnemuhle paper, this print is much more stunning in person as it emits a pearl-like shine.

Spencer Keeton Cunningham is a contemporary artist who has been exhibiting in museums and galleries for the past 18 years. He has exhibited at the Wenying Highland Art Museum in China, The Crocker Museum, The Autry Museum in Los Angeles, as well as Hong Kong, Australia, Japan, New Zealand, Mexico, New York, Oakland, San Francisco, Hawaii, Tasmania, Amsterdam, Miami, Alaska, Seattle, Toronto, & British Columbia. Cunningham's work can be found in the permanent collection of the Berkeley Art Museum and was recently inducted into the World Congress of Art History in Bejing China by Art Historian Elaine O'Brien.

More about Spencer from the press:

"Spencer Keeton Cunningham’s work is especially provocative. His work is at times frightening,images on the destruction of American Indian culture. It is like the art version of a Sherman Alexie poem, scathing and upsetting, but somehow with hope and a sense of humor. It’s impossible to capture the power of Cunningham’s stuff with one picture. The installations as a whole are what does it." -America Singing

“The scale and color density of artist Spencer Keeton Cunningham‘s work makes it almost impossible to ignore—but it’s the poignant, painful subject matter that makes his work difficult to forget. By pushing around the overly romanticized notion of North American Indian culture as a series of icons--Cunningham is able to speak to the viewer through short, graphic strokes that hit hard. He’s interested in presenting his own take on the demonization of tribal people in American culture.” - Beautiful Decay Magazine