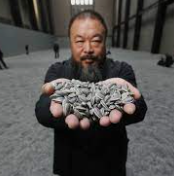 This is a one of a kind LEGO set from Ai Weiwei's 'Trace Sculpture' displayed on the famous Alcatraz Island during his @Large exhibit. Only available to attendees during the time of the viewing. Very rare, one of the only ones currently on the market.

Despite the playfulness that LEGO conjures, Ai often uses it to create artworks that draw attention to human rights violations around the world. His 2014 installation, Trace, originally commissioned as part of a site-specific exhibition in the former Alcatraz Federal Penitentiary in San Francisco, paid tribute to 176 activists and prisoners of conscience through large-scale portraits made of LEGO. Trace also reflects Ai’s own experience as a political prisoner—at the time of the exhibition, his passport had been revoked by the Chinese government following a crackdown on political activists and dissidents, and he was unable to attend the exhibition.

Like many of his artworks, Ai’s experimentation with LEGO hasn’t been without controversy. In 2015, LEGO refused the artist’s request for a bulk order for an upcoming exhibition at the National Gallery of Victoria, citing a policy that prevents them from approving the use of LEGO for “political works.” After Ai announced this news on social media, people all over the world began offering him their own LEGO bricks using the hashtag #LegosForWeiwei, and establishing collection sites around the world, including one in Toronto at the Art Gallery of Ontario.

Ai ultimately decided to forgo using LEGO for the project, instead using imitation bricks made in China, further adding to his ongoing examination of value, meaning, and identity. The resulting artwork, titled Letgo Room, featured twenty portraits of Australian political activists made up of over three million knock-off LEGO bricks. Shortly after, LEGO dropped their restrictive policy, saying they would stop asking customers about the reasons behind bulk orders.