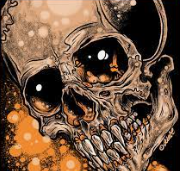 Provenance: Hand-signed and hand-numbered by artist. Artist embossment on bottom center with hand-written title and stamp on reverse. Comes with gallery certificate of authenticity.

Brian Schroeder, also known as Pushead, is an American artist, record label owner, and writer within the hardcore punk and heavy metal cultures.

He was first active as the singer for the band Septic Death, obscure during their 1980s career but later recognized as pioneers of the thrashcore genre, gaining reviews in The Rocket and Creem.

Schroeder has since worked primarily as an artist, often featuring images of skulls and skeletons in his work. He has created artwork for many bands, artists, and athletes including Metallica, Misfits, Dr. Dre, Travis Barker, Rocket from the Crypt, and Kool Keith. He has designed many record covers, T-shirts (most notably for Thrasher), skateboards, and two pairs of Nike SB Dunks.

Pushead's style typically involves detailed skulls which are often gruesome and weathered. His work has been associated, in the early days with metal band Prong, and most visibly with Metallica, as seen in Metallica's 2 of One (music video for "One"), on the album cover for St. Anger, numerous interior album illustrations (most notably for And Justice for All), and various web graphics and T-shirt designs such as Metallica's Damage, Inc. graphic.

In 1991, he designed and illustrated a number of sticker inserts for a series of heavy metal and hard rock trading cards called RockCards, released by Brockum. He designed skateboard graphics and advertisements for Zorlac Skateboards during the 1980s and beginning of the 1990s.